Yesterday’s “early” was fantastic.  Having the morning to ourselves, David, Kimberly and I walked at one of my favorite childhood spots — (have I mentioned we are in California now)?  Amost no one was there and we had the cliffs, beaches and tidepools to enjoy without distraction. 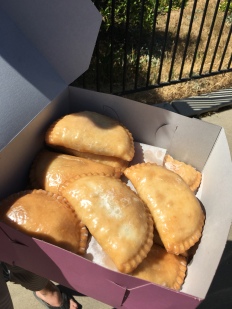 Even earlier we were able to visit our favorite bakery. Usually I am concerned that the boysenberry pies will be sold out – yet we were early enough to buy a complete dozen.  YUM!

Yesterday we received a not-so-early yet first-thing-in-the-morning phone call.  Mark’s pathology report was in and the news is good.  They reported clean margins and the seven lymph nodes taken were also clean.  The cancer was just as the biopsies had shown – we caught it EARLY!!  And early is good.

Here’s the thing – it was not caught by our yearly MRI screenings.  It was not caught though bloodwork – though his blood was tested specifically for this reason.  Mark had absolutely no symptoms.  He did, however, go for a routine checkup with our family doctor.  She thought that she felt something unusual and sent him to a urologist.  They did their tests and were unconcerned.  Months later our oncologist had some concerns about something unrelated (and unwarranted – whew) which led us to visit a specialist at the Hunstman Cancer Institute in March.  We mentioned the concern of our family practitioner.  He listened, examined, biopsied and diagnosed.. it took a week.  The next week Mark and I flew back to Salt Lake City for the day.  We learned that doctors around the nation were very interested because Mark was the only known Li-Fraumeni patient to be diagnosed with prostate cancer.  They usually do not live long enough.  (Mark’s father died from prostate cancer.  He had Li-Fraumeni syndrome but had not been officially tested and put on their radar.)    Mark is also very young for this diagnosis.  Normally a man would watch and wait for several years.  Li-Fraumeni men do not have this luxury.  Our tumors are very unpredictable and don’t obey the rules.

I digress.  The great blessing here is the early detection!  What a miracle!  No signs, no symptoms, unseen on scans and a normal PSA – yet those tumors were growing.  I am so grateful for the doctor that brought this to our attention over one year ago and for the geneticist who contacted me last fall to ask about Mark’s scans (he hadn’t told me there was any concern).  I’m grateful that our kids wanted to go to Utah over spring break.  My list of gratitude is pretty long – I won’t go on.

Mark is resting, drinking fluids and walking regularly.  He is one week post-op and improving daily!

One thought on “Early”