Seaman.  Any self-respecting school child in the Pacific Northwest should  know who this is… the trusty, canine companion on the Lewis & Clark expedition.  Seaman makes me want a Newfoundland dog – if only I could afford a personal groomer to go along with him.  They are big, beautiful, hairy dogs!

At the Ape Caves

When I was in seventh grade my family moved to Hayden, Colorado.  Born in California, I had attended school in Utah, Nevada, New Mexico and Wyoming.  I learned a little of the history in each state.  Seventh grade Social Studies meant that we worked several weeks compiling a scrapbook of Colorado state history.   It seemed that everyone else in the class already knew so much – then I stumbled upon a magazine or newspaper dedicated to the subject.  My scrapbook filled two binders!  All that I remember were the silver mines and the columbines (the state flower of Colorado).  I thought that the columbine was the most beautiful flower that I had ever seen.  How could something so beautiful grow outside of the tropics?  A variety of the flower is almost always in my yard – I seem to feel a sense of ownership.  I learned about columbines and they became a part of me. 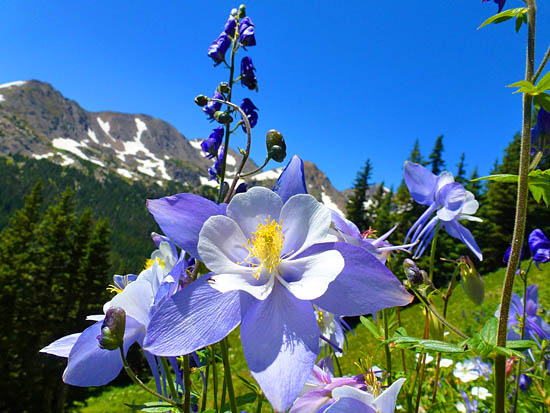 Moving to Texas was interesting.  I can’t say that I had ever given Texas a second thought.  For obvious reasons I recognized the flag…. who wouldn’t?  Yet I have been very happy here – trying to bloom where I am planted, etc… The sense of ownership, however, was missing.

I am happy to report that this has been remedied – my sweet mother-in-law sent me a copy of her book, “Texas” by James Michener.  She introduced me to Michener over twenty years ago when she encouraged me to read “Mexico” prior to vacationing in Puebla, Papantla, and Veracruz.  It made all the difference on that trip!  I consider James Michener to be a master storyteller.  He weaves his stories with threads of history, characters, settings and situations that fascinate me.  “The Source” was my favorite, and before my third child was born I read “Poland,” “Space,” Chesapeake,” and “Centennial.”  There may have been more that I don’t recall.  I know that I had not been tempted to read “Texas” and after that third baby… reading became a luxury I could not afford.

Seventeen months after landing in Texas, I now have that sense of ownership.  Michener showed me the Texas that was scarcely known to the early Spaniards, the settling of San Antonio and its several missions (not just the Alamo), Mexico gaining its independence from Spain a

Read it in paperback – this was too heavy to carry around and required pillows to prop it up at night.

nd then allowing a limited number of American colonists to move in,  followed by those American colonists (Texicans) helping Texas gain independence from Mexico as a sovereign country and later joining the United States.  I learned about the growth of cotton plantations, the Civil War, and Scottish and Irish immigrants.  Indian wars, real estate and oil wells.  He even addresses high school football.

Michener’s characters all had their own feelings about the land and the climate.  They understood how Texas can get under your skin.  Some left as soon as they could, but most of them grew to love it here, just as my family has.

Our Texas adventure has become more rich and meaningful.  I can go outside, breathe deeply (except in August and September when the air is so hot and humid), and feel a sense of ownership and belonging.  I have learned more about Texas, and it is easier to love.  Funny how that happens.  (I still plan to end my days in the cool mountain air of the West – after all, my columbine transplants did not return this year.)

How do relationships (of any kind) change when we take time to learn about something or someone???