March 26 was my last blog post – It is almost June 26 and I have been very neglectful.  I opened up blogger tonight and found this draft – no typing, only photos.    What was my intent?  This will remain a mystery, but since it’s here I will discuss my photos for posterity…. 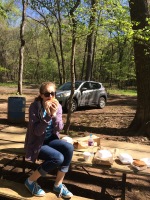 Here is Kimberly eating lunch in Palestine, TX.  We had a Friday off of  school and decided that we should explore.  A friend told us there was a Dogwood Festival – and I jumped at the chance to see dogwood trees.  The warm winter had brought the blooms too early, but we saw a few.  The great treat was to find a beautiful part of the state where rhodendrons and azaleas were blooming like crazy.  There were tall evergreen trees and we felt that we had taken a quick trip to our beloved ol’ northwest springtime.  Beautiful! 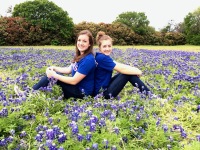 Kimberly and Natalie are sitting in the Texas Bluebonnets.  These flowers have a reputation for being spectacular – and they were!  Wow!  Intense color through the fields and along the roadways.  Apparently the tradition is to plop your little ones among the blooms and capture the moment.  So – here are my little ones and the moment forever captured.  The wildflowers haven’t stopped either – my mind is completely blank to the name of the flowers that captivated me when I drove home from Utah in April… hmmmm.  Well, anyway – for quite some time the fields have been yellow with black-eyed Susans.  Love it!! 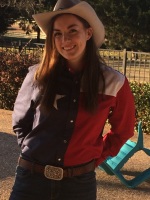 All decked out in her Texas finery, Natalie has made the most of our move!  Though Texas offers a form of concurrent enrollment, it does not compare to the Washington option and would not have helped Natalie with her future plans.  Going back to high school wasn’t really an option, so – though officially a Junior in high school, Natalie opted to take the GED which she passed with honors.  She was accepted to BYU and left us in April to begin Spring term classes.  To celebrate, she chose a beautiful pair of cowboy boots so she can “put her cowgirl on” – even in Utah. 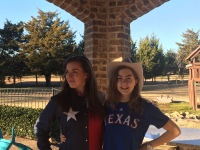 Speaking of putting on her Texas, we all enjoyed those last months with Natalie as she worked at a hamburger restaurant in a part of Texas where patrons tended to have very heavy accents.  After trying to take an order or two and not being understood – she developed an accent of her own.  Suddenly she fit right in and became very popular with the customers. 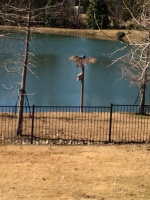 Our neighbor has the beautiful pond which attracts birds all year.  Late winter found us enjoying turkey vultures.  They are huge and graceful.  There were several of them and they would swoop through our yard as they came in for a landing.  Blue herons do this often as well.  We took this photo one sunny morning as this bird was sunning himself.  Spectacular!

My muddy kids decided to go kayaking on our own little pond with friends.  Silly kids – cold, wet and muddy.  Just like when they were little, I made them spray off with the hose before coming near the house.  Brrr. 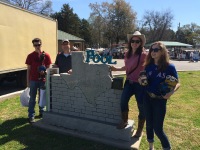 First Monday Market Day in Canton, TX.  This was fun, but, with the crowds and heat, I wouldn’t want to come during the summer.  I think we went in March – this is a huge flea market which has been around for over 100 years.  We gave each child $25 so that they could all find their own sort of treasure.  Great memory, worth the money!
So – that’s the last photo… we are enjoying Texas.  The people are certainly the best part!  I have met many fine women which have improved my life for the better.
New friends, new experiences, new perspectives….
Once again, an experience I would not have chosen for myself has blessed my life immensely.