Shiprock, New Mexico – as we approached Shiprock I told Mark the story of my family’s experience in Shiprock almost 40 years ago… My parents had moved to Farmington, NM and when they heard there was a parade in Shiprock they thought that they would take the family to absorb some local culture. Well, it worked… I was nine years old and I recall the “Cuchina” dancers, but my parents remember that we were definitely a few grains of salt in a large pepper shaker – definitely the wrong ethnicity and not exactly welcomed. Oh well.
Yesterday it would appear that Shiprock had once again had a large parade – maybe they do this quite often. The traffic was horrific, but as we slowly made out way through town my mouth was watering over the many little stands selling Navajo tacos. Though we make them at home, I know that they are not as good as the ones I remember from my childhood in New Mexico. Therefore, when we came to a little gas station/café in a town called Cuba – we decided to order some Navajo tacos and frybread.

“Green or Red Chili,” the man was asking me – I asked which was the least hot…
“They are both hot,” was his reply – hmmmm.
“I guess I will take red”
“Red is hot!”
“Then I will take green.”
“Green is hot!”
“Please make mine without chili.”
….I got green. It was hot. We ordered to go and pulled over beside a little adobe Baptist church to eat. It was delicious, but hot. Too hot. We enjoyed a few bites and set them aside to eat the fry bread with some honey. I noticed that she had also added little packets of salt, probably to spice up the green chili, but I decided to add it to the honey on my fry bread (cheap honey packets aren’t too great) and was rewarded with a kettle-corn-like fry bread experience. Yummy as it was, Mark had spoken of some great sopapillas in Albuquerque so I only had a few bites. I guess I am going to have to get used to eating deep fried food if I am going to live in the South.

Back to Farmington – watching the map as we drove through town I saw that we would be driving right past my old neighborhood and was so thrilled for a chance to check out the old house! We drove right to it – 1409 Camino Monte. Almost 40 years later and there are all the memories coming so clearly – we passed my friend Tanya’s home with the large addition in the back that my dad helped to build… there was the home that was robbed the same week as ours… the driveway that we weren’t allowed to rollerskate on even though their cement was so smooth… the neighbor’s house with the nice dad who saved us when we (the children) thought our house was on fire but it was only us burning up our treat in the oven… the Butler’s home where we lived while waiting to move to Wyoming… the Carlson’s home where I had my first babysitting jobs when I was 10 years old… and my house – missing the tree in front that I used to climb.

We drove to Bluffview Elementary – on the way I saw the house where the lady told me that I was too old to trick-or-treat; though in reality I was just tall for my age – I was 9 years old and so mortified Inever went out trick-or-treating again… I saw the alley where someone had dumped old sheetrock and we would take pieces of it be chalk on the sidewalk… The school had changed of course… it was so much smaller than I remember… I saw the gym and remembered sitting at a before-school parent meeting with my mom being so shocked that we would be expected to bring our own school supplies because we had moved from Reno, Nevada where they had enough money to supply paper, pencils and other supplies for their students…. There was the library which made me remember the day that I had pretended to be sick in order to skip the all-school spelling bee. My friend and I had won our grade level and I was so afraid that I would win again and be sent to a larger spelling bee – the teachers made it sound fun, but to me it sounded like a nightmare. Then there was the playground… the fun get-your-wiggles-out equipment had all been replaced with colorful and safe yet boring places to play. They used to have rows of half-buried tires to do hurdle races and we even had a semi-circle of telephone poles buried on-end at different heights to jump between.  Someone had donated hundreds of giant tractor tires and they were creatively made into all sorts of play equipment.  There was an awesome piece of equipment called “The Spider” which entailed hanging on vey tights and being spun in the air – like a merry-go-round in the sky.  There was always a big line to play here – and usually one or two injuries each year… but even the injured kids were back in line as soon as permitted.  Poor modern children – There are schools in town have “no running” rules.  Really?!?  My teacher kept a shoebox of Indian pottery pieces that we would find at recess while digging around in the dirt. We could take them home if we wanted, but it was fun to see her collection grow also.  I suppose that would all be illegal now…  For the record, I had the same teacher for 4th and 5th grade – her name was Amaryllis Trujillo and she was amazing.  She is the teacher who introduced me to one of my all-time favorite books, The Hiding Place  by Corrie Ten Boom. 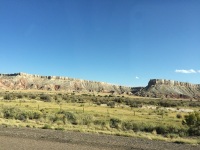 Wow – I was amazed at how the memories came flooding in. Life is so interesting. So many people with which to interact… so many experiences to shape and form who we are today.
And the Land of Enchantment… I am, indeed, enchanted. Driving through New Mexico was a beautiful adventure. The bluffs and free standing monoliths – different colors and shadows. I wanted to get out and explore so many places – enchanting is a great description for what we saw yesterday. Southern Utah is magnificent as always. As I type we are driving through Western Texas – it is flat and I find it invigorating. Big sky… the hills are beginning to roll now (typing while en route) and I am reminded of my roots in Central California. Driving out Friday through the Columbia River Gorge I knew it would be one of my last times to make that drive – the Gorge has intrigued me since I first saw it almost 23 years ago. It is no secret that the beauty of the northwest is intoxicating to me – but driving through the varied landscapes for the past three days reminds me that I simply love the earth. The variety is spectacular and I am grateful that my Father in Heaven has provided such a get-my-hands-dirty-and-have-fun-doing-it type of playground in which to live, love, laugh and learn!  He obviously loves us very, very much!!

I found this photo of my 10th birthday party – we moved away the next year but I remember most of these girls… left to right – Lori, ?, Elizabeth Penrod, Andrea Nygren, Myself, JoAnne, Shirley, Nanette Nygren, ?, Patty Palmer.