“A representative from Make-A-Wish will be contacting you soon.”
October 2010 – We were in the hospital for our first round of chemotherapy with Greg.  Our world was spinning and emotions were everywhere.  Hearing that Make-A-Wish was coming made our hearts stop…. what did this mean?
We had heard of Make-A-Wish and not given it much thought – it was for children who were about to die.  At least, that was our impression; so when they announced that they were coming to see Greg –  it was quite a shock.  I think Greg’s caseworkers were accustomed to this reaction and were quick to explain that a visit from Make-A-Wish does not mean imminent death, but it is for children with a life threatening illness.  This was a relief, and, since we were already in shock at having a child with a life-threatening illness; we tucked it away with all of the other emotions swirling through our lives.
Everyone thinks that they would like to make a wish – but it isn’t as easy at it would seem.  At least not for my kids who aren’t used to asking for things very often.  Greg spent a great deal of time thinking about it – and he finally settled on camera equipment.  He received a nice camera with several lenses and case, as well as a short class on photography.

With all that we had gone through those seven months, receiving that camera was more than wonderful!  It was such a tangible event – something that showed that there are people who really care.  Our entire family celebrated that camera and all that it represented, and Greg has truly enjoyed using his “make-a-wish-camera.”
Jacqueline has also been granted a wish.  Incredible to be in a family with two wishes!?!  (Natalie’s brain tumor was not “life-threatening”  – so no wish.)
I will quickly point out how many of their friends say things like, “No fair!  I wish I could have cancer so that I could get a wish.”  No – they would do best to wish to never have cancer.  My kids assure them that it isn’t really worth it…
Sidenote – We are friends with a family with four young daughters.  After one of their girls had a brain tumor, her wish was granted to go to Disney World.  About a year later I was speaking with the oldest sister who was 12.  She said that it was really awful that her sister had the tumor, but it all turned out well because they got to go to Disney World.  I thought that was a great example of how Make-A-Wish helps to turn a difficult situation into a good memory. 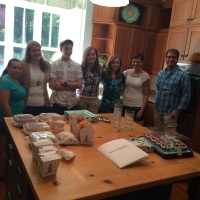 Back to Jackie – she took an even longer time trying to think of what her wish would be.  These things are truly left to the children with parents/friends/family encouraged to let the child think of their wish entirely on their own.  We all thought of what we would like to wish for, but Jackie was absolutely on her own and her wish was nothing like anything we had thought of – but we are all so excited for her.
Jackie wished for “A Food Experience in Italy” – and that is what she is getting!!!  Our family will leave next week for a vacation in Rome, Italy.  We are very excited – though life has been so crazy preparing for our move that we haven’t had much time to think about it.  This works, however, because we do none of the planning – they take care of all of it!  Right now I am in Rexburg, ID to pick up Jackie from college – she is taking her finals a few days early and then we will drive back to Washington.  We should get there a couple hours ahead of our Make-A-Wish friends who will give us her “wish” and it is then that we will know what our plans will be.  That will be Saturday night and I do know that we leave at the crack of dawn on Monday!

I don’t know if I can adequately describe what it means to have this wonderful organization do such kind and amazing things for my children.  I wish that every child who struggles could have someone reach out to them like this.
When our world was rocked by cancer – life turns inside out and childhood is forever changed.  Being granted a wish is like a shining light – warm and inviting – giving comfort and hope simply by knowing that people care.  It is funded by strangers who want to make a difference, and I want them all to know that the difference it has made for our family is significant.  We haven’t been to Italy yet, and Greg’s camera is with him at BYU, but our entire family’s burden has been lifted by the generosity of people who do not even know us.
The world would be a better place if we all did one small, kind thing for someone else today, and everyday!  There is just something about service that makes life better for everyone! 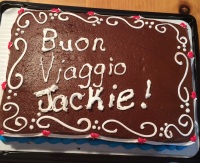 Now it is Saturday night – Make-A-Wish came to our home with a dinner party from Jackie’s favorite Chinese restaurant.  We ate and then they presented us with our itinerary which will include two days of bus tour around Rome and a one day “food experience.”  The rest of the time is ours to spend as we like – so we hurried down to the bookstore for a Rick Steves book on Rome.  A limo will pick us up at 4 a.m. on Monday to take us to the airport – how fun is that?