My heart is so heavy this morning as I ponder two texts that I received within minutes of each other.  Two dear friends of mine have family members with some very serious medical issues and I am feeling weak and helpless.  I know that prayer and faith sustain me – I worry that I am not strong enough at the moment to do all that I can to help sustain them.  Certainly I stopped everything to pray specifically for them to feel strength and peace, and to know what I can do.  I am not exactly at my strongest – my one little goal today was to work with the kids to clean the mudroom, and I knew that would be a good accomplishment… I look forward to times of strength when I have more to give.

I have been thinking about this lately – especially since my children have been asking, “Mom, when are you going to give us our summer plan?”
Yikes!  For many years I have had some sort of family plan for the summer – we set goals, fill out charts, earn prizes, etc…  This year my mind is blank.  Summer vacation began this week, so I pulled out our “school year plan” book that I made last fall.  We didn’t do very well, so I was hoping that we could just change dates and use it for summer instead – the book I pulled out was Mark’s.  His final “journal entry” said, “We got our results from Huntsman [Cancer Institute] today.”

That was mid-November and we have not even made an attempt to use our books since then.  I have neither looked at or even considered them.  This gave me insight into our lives – we haven’t been doing as great as we think.  In November we learned about “something unusual in Natalie’s brain”, and a few things going on with Jackie that have still not addressed (liver, parotid gland).  We got through the holidays and it was the day after Christmas that the doctor called me from his vacation to say that they had somehow overlooked the large spinal tumor.  Sounds horrible, but I was thankful that we had gotten through the holidays without that worry hanging over us. 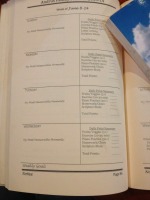 We simply cannot function well when our load gets heavy.  I am very aware that my load is nowhere near as heavy as others.  Within the last few weeks I have heard of two other young men who have had bone tumors similar to Greg’s.  One lost his leg and the other lost his life.  I have heard of a friend’s brother who had a chordoma like Jackie, and he passed away within the year.  My friend’s daughter had a brain tumor a few months ago that will affect her for the rest of her life – and as I was preparing to leave the hospital I overheard a distraught mother on the phone saying, “I don’t know what will happen… they say that it is a quarter the size of her brain.”

I can only hope that all of these people have faith in their Savior and hope in his Atonement to give them the strength to which we all have access.
I write that I am feeling weak, and I write that I have strength – sometimes I feel that it is this strength (which is not my own) that gives me the ability to allow myself times of weakness.
Why have we been so blessed to have such positive outcomes so far?  I have believed it is to give my children experience to be strong and help others in their future.  I see that it also gives me empathy that I cannot gain any other way – I can be a more effective friend because of the things that I am learning now.
One of life’s best lessons – things can really seem bad – but we choose our response.  There is so much to be happy about, so much to be grateful for – and the sun will always rise.  Despite knowing that we can be happy – there are times of sorrow and discouragement – I figure these times are a blessing so that we recognize the difference when peace does come – and it takes time.

Obviously I really like Joshua 1:9 – Be strong and of a good courage – The Lord tells us what to do and then gives us a way to accomplish it.
I find myself writing the same things over and again – this is what is on my mind and they are important lessons… I will write it again, I am sure.

Natalie’s update:  We came home last Thursday afternoon and she began sleeping.  She woke up Sunday morning and announced, “My brain is back!” and suddenly she was normal again.  We have to remind ourselves that she has activity limits and we need to be gentle with her – but she is functioning quite well.  Certainly she tires more easily, but it turns out the doctor was right, I would have been able to send her to school by today.  She is very excited to be attending a three-day youth conference.  There is a medical trailer that is available for her to rest as needed, and she needs to not engage is too much activity, but she is with her friends, learning, doing service projects and best of all – there will be a music festival on Saturday.  She was with the choir that performed several of the songs last fall and she has been incredibly excited about it ever since.  It has been upsetting to her when there have been friends who haven’t had good attitudes – then when it looked like she might have to miss it… well, it was sad.  During the hospital stay last week, her one concern (after wanting to see her friends), was whether or not she would be able to participate (and it was looking like she wouldn’t) – so this is a happy day!  Watching a performance with over 1,200 youth would brighten anyone’s day!  In a society where so much is dark and negative – a perfect brightness of hope is much needed!
We saw our neurosurgeon yesterday.  He was pleased with her wound care. One more week until she can fully immerse her head in water – then six weeks of careful activity.  She can walk and hike now (non-strenuous) and then proceed to light jogging, etc.  No contact sports for three months which is when we will do our follow-up MRI.  Her tumor is called a DNET (Dysembryoplastic neuroepithelial tumor)
It is benign – but it is usually associated with epilepsy/seizures.  Natalie has never had a seizure, so we are grateful to have it out before symptoms began.  Following her first surgery, the surgeon had told me that the “unusual” tissue he had removed appeared to resemble tissue associated with seizures – during her second surgery, when they removed the tumor, they also removed more of these unusual areas.  I am glad that they are out – perhaps this is why she needed to go twice?  It seems that after the tumor was removed that the pathologist said something about those areas being messed up due to the presence of the tumor (like scar tissue maybe).

I just remembered another “chordoma” story that I learned this spring.  Our neighbors said that their nephew had a chordoma just a few years ago – it had wrapped around his brainstem and was inoperable.  I think that he was 17.  Then… it was gone, completely.  They attribute it to a miracle and so do I.  There is no other explanation.  We go to different churches, but can we say that we are of different faiths?  I don’t really believe so.  We pray to the same God and we are all his children.  My sweet niece, Camille,  is in Mexico preparing to serve as a missionary in Houston, TX.  Her most recent letter included this quote from Richard G. Scott regarding prayer, “You are His child! You can trustingly approach Him! He doesn´t care if your feelings are clumsily expressed, you´re His child! He wants to hear from you!¨

One thought on “Remember When Summer Plans were Simple?”