Cancer
I believe that is is through life’s trials that we learn our most valuable lessons.  For us, it seems that cancer will be the means through which many of our lessons will be taught.
We found Mark’s first bone tumor just nine months after we were married.  It was not malignant, but it was life changing.  His left upper femur and greater trochanter are now a large chunk of cement rather than bone and this has drastically reduced his activity level.  He has also had tumors removed from his wrist, shoulder, and face (parotid gland).  His only malignancy to date was a stage 2+ apigmented melanoma on his upper right arm.  He had surgery but we had the option of chemotherapy and opted out.  That was almost 7 years ago.
When my second son, Greg, was 17 he was diagnosed with osteosarcoma.  He had a very large bone tumor on his right tibia.  He spent seven months (his senior year) undergoing intense chemotherapy and his tibia has been replaced with a metallic “rod”.
After turning 15 we discovered that Natalie’s shoulder pain was actually caused multiple tumors in her shoulder joint, called synovial chondromatosis.   Rather than producing synovial fluid to lubricate her shoulder joint, she had begun to  produce cartilage.  This was not malignant, though it does mean MRIs every six months for several years.  We are also following an “abnomality” in her brain.
Currently, we are days away from Jackie’s thoracotomy to remove a chondroma.  This is a very rare malignant tumor that has grown on her anterior thoracic spine.  She also has tumor like her dad’s in her parotid gland, but that is low priority at present.  Jackie is 17.
This all sounds awful, and it is.  It is a result of Li-Fraumeni Syndrome which means that those of us who test positive have an impaired ability to fight cancerous cells.  Nevertheless, it is our life and we have embraced it.  We have learned so much.   With Greg’s diagnosis we decided to make it all an adventure, and it is!  The choice is to laugh or to cry; we cry a little and we laugh a lot. 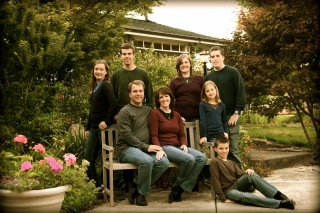